We use rigorous quality and security procedures in accordance with ISO 9001:2008

We Use Green Energy

Respecting the environment and using modern instruments, we manage to manufacture your products with minimal energy burden.

We undertake the design, manufacture of molds for metal objects.

We also manufacture or repair molds for any metal product.

Our company has the object of producing metal and plastic parts for metal containers (metal cans), which contain foods, oils, olives, cheeses, paints and chemicals.

The company is dedicated to professionals as it has a wide range of products and a huge variety in each of them. 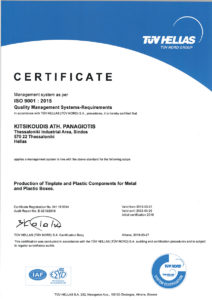